In my last blog, I talked about stamping and I'm still talking about stamping! One of the effects I particularly like is splitting the image into two contrasting colours. Usually, this is black and white and that's what I did with the Daisy Silhouette card below. 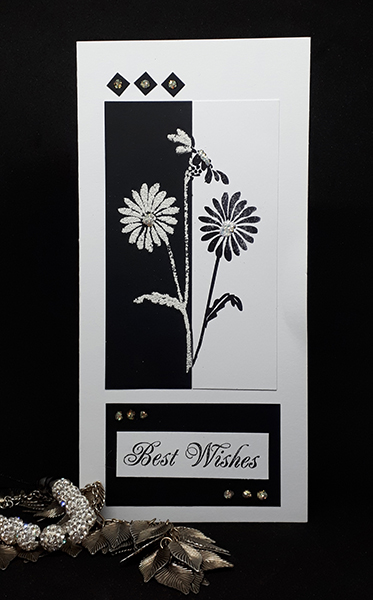 Use Versamark to stamp the image on both white and black card. Then heat emboss with Wow Bright White embossing powder on the black card and Wow Primary Ebony embossing powder on the white card. Now decide where to split the image along a convenient centre line, I used a line just to one side of the stem. Trim both the black and white card down to the same size and cut straight through the centre line. And that's all there is to it. I think this works nicely for men's cards as it has a simple, clean appearance. The sentiment is part-stamped Sleek Designs With Best Wishes stamp

Now the choice of a stamp would normally be one that gives a solid image rather than an outline. But I wanted to try it with something a bit fussier. So the second card uses Butterfly Flourish stamp and pink and black card instead of white and black and I'm rather pleased with the result.

Unfortunately, since I made the card I have run out of the Butterfly Flourish stamp but you could use the Flourish Butterfly, Floral Butterfly and Background or Frilly Butterfly stamps as they are similar. 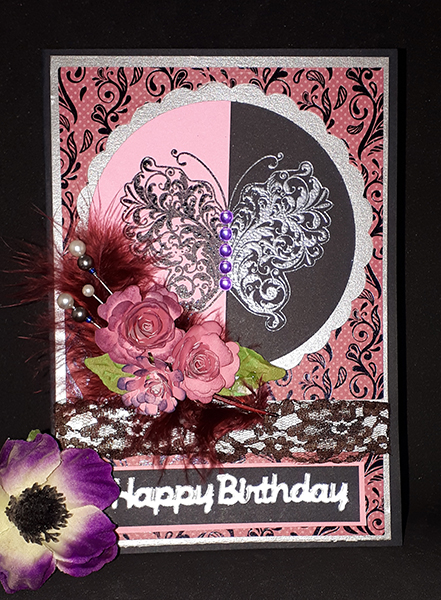 Again stamp the image with Versamark, this time on pink and black card. Heat emboss with WOW Primary Ebony powder on the pink card and WOW Silver Sparkle embossing powder on the black card. Finding the centre line is easy, as the image is symmetrical either side of the body. Cut both cards down the centre line and tape the two halves together from the back. Die cut the joined halves using a circle die such as First Edition Scalloped Circles.

We use cookies on our website. Some of them are essential for the operation of the site, while others help us to improve this site and the user experience (tracking cookies).

You can decide for yourself whether you want to allow cookies or not. Please note that if you reject them, you may not be able to use all the functionalities of the site.